It is winter in New York City. Oh, I know, that flirty temptress Spring lifted her skirts a bit a few days ago, but the City was very recently besieged by benumbing temperatures and snow and is once again shivering under a rainy grey pall. I am, however, finding ways to cope, like happy hour, because no matter the weather, you can always find a good cocktail in this great sodden metropolis. Just the other day, I sat at LIC-favorite Dutch Kills, enjoying daiquiri-induced day dreams about fun times on hot, sun-soaked islands… like Malapascua in the Philippines.

I arrived in the Philippines on April 30, 2015–six months into my great escape from NYC. I had hit the road in the fall of 2014 without a real plan and was choosing destinations based on any of the following:

Divers I met on a boat in Komodo National Park, Indonesia told me about the amazing sea life swimming around the Philippine islands. Forty-eight hours later, I was on my way to Cebu City.

Despite my “go-where-the-road-takes-you” lifestyle, I felt just shy of being a true free spirit. What kind of adventurous nomad shows up somewhere with a wheeled suitcase and a hotel reservation. I mean really!? So, after one night in Cebu City, I left my suitcase and laptop in hotel storage, and headed to the bus station with my backpack and vague directions on how to get to Malapascua, one of the Philippine’s famed diving destinations.

My short-list notes from Malapascua say:

And the long notes? Well…

New Friends : )
A taxi driver deposited me outside Cebu City’s north bus terminal. After a few confusing moments in the hubbub, I spotted a trio with suitcases that I thought must be full of dive gear, so I asked where they were headed. They were on vacation from Kuala Lumpur, Malaysia and also going to Malapascua, where they had been many times before. They were intrepid travelers, divers and all-around fun souls, and we became fast friends.

We had a long wait for the bus followed by a 5-hour ride to the port at Maya on the northern tip of Cebu island where local ferries make the jump to Malapascua. Stepping off the bus, I was struck by the port’s painterly scene brushed in a palette that I will forever associate with the Philippines. Low waves on the surface of the sea rippled over variegated shades of blue, teal and aquamarine, beneath a broad sky daubed with blue-grey and white clouds. The sea met a simple jetty of sand and concrete where a few travelers stole shade beneath a rust-streaked tin roof. My eye was drawn by the occasional intervention of bright green or hot pink as I waited for the ferry.

Boarding the boat required a steady walk on a swaying gangplank. Men with practiced legs and strapping arms loaded heavy suitcases with ease and steered the boat off into the Philippine Sea.

The Port at Maya

Boarding the ferry to Malapascua

On the ferry to Malapascua

Tank Room and Food Poisoning : (
I waited a few minutes on the hot Malapascua beach for my backpack to arrive from the ferry while fretting about finding a room. During the journey, I learned that May 1 or May Day is a holiday across Southeast Asia. Malapascua is a popular spot with both local and foreign tourists, and it’s a very small island–you can walk around it in two hours. The problem with not having a truly spontaneous nature is the stress induced by lack of planning.

After several inquiries to no avail, I did find a room. It was at the back of a dive resort just above the space where they fill air tanks. That night was challenging. The compressor grumbled noisily into late hours, and the crew came before dawn to collect the tanks, a laborious clanging process. And also, there was the incessant trumpeting of the roosters seeping through my earplugs. The cocks of the Philippines feel it their duty to pepper the air with their pompous cries at all hours rather than holding to the visitor’s mythical idea that they should only herald the sunrise.

The next day, I switched to a room at another dive resort that, while musty, was above a much quieter office. I then groggily ate lunch at an off-shore cafe serving a selection of precooked dishes. This might be just fine during working-day, climate-controlled lunchtimes in NYC, where turnover is quick and dishes are oft replenished, but not on a tropical island with limited refrigeration. As a visitor, my gut was simply not equipped to gracefully handle whatever microbes had set up camp in the sautéed eggplant while it sweated in the swelter.

Yep, I lost a few days of diving to that impulsive lunch, but my circumstances improved greatly thereafter. I recovered, the crowd thinned and I moved to Buena Vida resort. There they welcomed me with a refreshing turmeric infusion and set me up in a clean, comfortable room that had a private bathroom and a lovely balcony with a hammock. And it was right next to my new friends! One hop over the balcony rail, and we were soon drinking vodka and playing Cards Against Humanity.  The next day I was happily back in the water.

The balcony of my room at Buena Vida

Nitrox : ) and Thresher Sharks!!!
Much of Malapasuca’s diving fame is due to thresher sharks, so named for the long arced tails they use to stun (or obliterate) and then eat prey, like sardines. Science writer Ed Yong explains this technique in his article Thresher Sharks Hunt with Huge Weaponized Tails (on National Geographic’s Phenomena Science Salon).

Boats head out from Malapascua before sunrise to a site called Monad Shoal, which is, essentially, a submerged island with a great view of a shark spa. At first light, divers drop down to 95 feet (~30 meters), take hold of a chain set up on a deep ledge and wait for sharks to appear. The sharks, which hunt nocturnally, are about as relaxed as you would expect for an early-morning spa visit. They hover gracefully while small fish called cleaner wrasse pick off dead skin, parasites and whatnot.

Because the dive is relatively deep and shark timing is somewhat unpredictable, most dive operators recommend diving Monad Shoal with enriched air or nitrox (not to be confused with nitrous). For you non-divers, nitrox is a compressed air mix that contains more oxygen (and less nitrogen) than unenriched air. Diving with nitrox requires a certification and has benefits and trade-offs. Simply explained, the benefit in this case is that a diver has more time at 30 meters with nitrox than without (i.e., you can hang out longer waiting for or gawking at sharks).

Rumors abound that one is also less tired (and possibly happier) after a day of diving with nitrox vs. air. Scientific evidence supporting these claims seems scant, and yet see how happy I look after seeing thresher sharks while breathing nitrox!?

I completed my nitrox certification and spent several days diving with Sea Explorers. (They were super! Check them out if you are headed that way.)

Mango Daiquiris! : ) : )
The best cocktail I had in Asia was the mango daiquiri at Ocean Vida on Malapascua. We would roll off the boat and onto bean bag seats and have a “deco” daiquiri while looking at the sea and munching house-roasted peanuts. The daiquiris were simply made with fresh mango, rum and lime which appealed greatly to my inner gastronomer.

The underwater architecture around Gato is dynamic and one site has a tunnel with a “cathedral” ceiling where you can surface and say hello to the bats before returning to the underwater life. The waters are graced by harlequin crabs, a riot of nudibranchs, slithering sea snakes, busy little shrimps, and ornate ghostpipe fish (below). Sometimes the animals put on a show. We saw a cuttle fish laying eggs while two others hovered closeby, and we witnessed a crab harassing a scorpion fish, one of the ocean’s most venomous creatures (true story!). 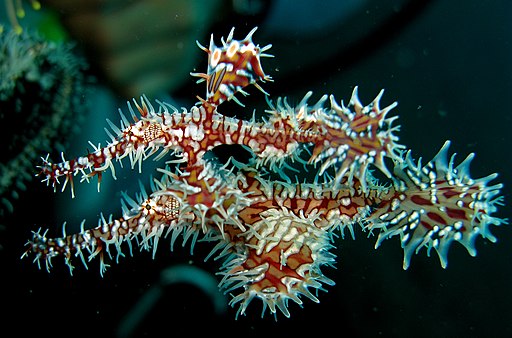 And Kalanggaman? The island’s underwater wall is home to many beauties and interesting critters, including cleaner shrimp, that, if you let them, will scrub your teeth! There we also saw rich black corals, more nudibranchs, a red scorpionfish, and a giant frog fish (a lumpy-mugged angler fish with gripping fins).

Topside, Kalanggaman is an exemplar of fantasy islands—a palm-spotted sand bar with sloping shores that ever so slowly descend into bathwater-warm aquamarine waters. And, so, revisiting my time in Malapascua will have to end on Kalanggaman. I’m just going to hang out here for a while longer… Maybe you should do the same. Get yourself a delicious daiquiri and come join the day dream.