I was having a conversation with a taxi driver on Bali, an island of tropical flowers, lush rice terraces and lovely seascapes. It was April 2015. I was 41, Obama was president, and it was an auspicious time for marriages in the Hindu calendar.

“Where are you from?”

“Oh, you have good President!”

“Where is your husband?”

“Not at the moment.”

The driver paused to assess the single foreigner in his backseat. Then he said:

“Maybe you will meet a husband in Bali. Do you know the author Elizabeth Gilbert? Would you like to drive by the house where she stayed?”

I replied, “No, thank you. Just take me to the Ubud Palace, please.”

“But you know it right? Eat. Pray. Love. Eat is Italy… Pray is India… And Bali… 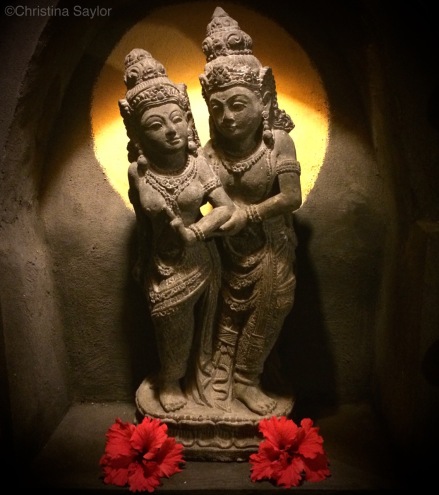 I laughed warmly at his enthusiasm.

I would have versions of this conversation throughout Southeast Asia, but particularly on Bali. Three questions were inevitable:

Where are you from?
Where is your husband?
How old are you?

A silent evaluation always followed, and sometimes, a curious barrage of questions ensued. Occasionally I altered my answer to:

“Oh, my husband was traveling with me, but he had to go back to the States to work.”

Or if I was feeling cheeky:

“Husband!? Who needs one? A husband would slow me down!”

At first I felt this line of questioning was prying and judgmental, but my perspective changed during the course of my travels. I began to see these conversations as a way of getting to know a stranger within the parameters of the Balinese Hindu culture, in which marriage is an essential part of fulfilling one’s spiritual duties. Attending a wedding a few days earlier helped me understand this distinction.

I was in the lush, soaring hills of Bali’s Munduk region. I was aiming to go trekking, but Nyoman, the manager at the hotel where I was staying, explained that the guides would be at a wedding the next day. He suggested I come enjoy the nuptials instead.

I was excited, but fairly sure I didn’t have anything appropriate to wear.

“But that’s quite a beautiful shirt! And we will find you a sarong.”

I looked at the pastel plaid button-down I had thrown on to deter the morning mosquitos. Balinese men paired striped or plaid shirts with patterned sarongs, but women at formal occasions wore lovely, intricate lace blouses with beautifully woven or dyed sarongs or traditional decorative kebalas.

I did the best I could with  my limited wardrobe, choosing a blue t-shirt to accompany the brown paisley sarong that the female chef at the hotel graciously loaned me the next morning.

My impromptu stylist wrapped the ankle-length sarong tightly around my body and tied a white belt around my waist, symbolically separating my heart and head from my body’s less pure lower regions. She gestured for me to walk, nodding in approval when it was clear I could still move my legs enough to get around.

A Swiss woman named Patricia, who had befriended Nyoman during one of her annual trips to Indonesia, was also attending the wedding. We traveled together to a house in a nearby village, and as we approached, we spotted the couple, wrapped in pink towels, standing outside next to the groom’s parents. A Hindu priest sprinkled water across the quartet again and again to cleanse any evil from their souls. It was one in a series of ceremonies that would culminate in a transfer of the bride’s spirit to the groom’s family, thereby sealing their union.

When the priest was finished, the group turned to form a procession and a family member used a small axe to break a coconut over the bride’s head. She bowed, shoulders hunched, as the sweet water gushed from its meaty interior. The group moved downhill to perform the next ceremony.

Although it was still early, the Balinese sun sizzled. We entered the shade of the host’s home where we were greeted with coffee, tea and traditional sweets. The simple open space with a concrete floor and corrugated roof was awash in bright celebratory colors. 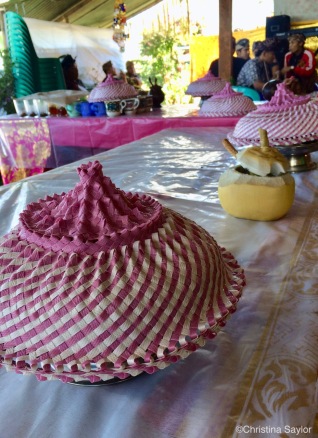 While I munched sweet potato fritters and sipped strong Indonesian coffee, Nyoman told us the ceremonies ensured that the bride’s spirit became part of the groom’s family. Without them, her spirit could become confused and lost after her death, not knowing which family she belonged with in the afterlife.

He further explained that the ceremonies could only be completed in a time of spiritual peace. If any unfortunate event had occurred recently, such as a death in the family, the final ceremony would be postponed until a more appropriate time. Nyoman also noted that each village has its own customs, so wedding traditions across Bali differed. 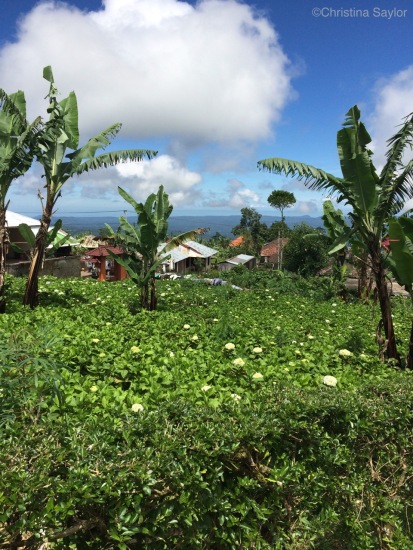 There was a long waiting period during which many more people arrived. I admired the scene and listened to Patricia chat with other guests in Bahasa Indonesia (the language of Indonesia). I had only just mastered “selamat pagi” (good morning) and “terima kasih” (thank you). So I sipped my coffee and smiled a lot, an approach I have found helpful on more than one occasion.

Patricia noticed I was watching a baby play with a happy relative. She told me that custom and ceremony play a large part in a baby’s first six months. In the first three months, a baby’s connection to the spirit world is kept intact by keeping the baby from touching the ground. The baby is always in someone’s arms during this time. When the baby reaches 105 days, the Nyabutan ceremony is performed to introduce her or his feet to the earth.

The bride and the groom returned to the house to undergo a long preparation for the next ceremony. Fueled by caffeine and sugar, my stomach was grumbling. So, Patricia and I walked outside and descended into the rooms below for a meal.

A group of men sat around a table chopping ingredients on thick blocks hewn from tree trunks, and a team cooked dishes in pans over open flames. The air was pungent with fresh chili, garlic and onion. The next room held a long table with tiers of dishes. I was gleeful at the chance to try so many foods prepared for locals. The seasoning and heat would be authentic and not tamed for the tourist’s tongue. Our meal, which included two trips to the buffet and a taste of nearly everything, was delectable.

Eventually the bride and groom emerged in resplendent and shiny dress. The priest joined the couple at the altar, which was laden with offerings for the gods.

Ah, I thought, the moment has come! Yet, the guests went on chatting. I asked Patricia why no one was watching the “big ceremony.” She nodded and explained that the ceremony was for the gods–not the people. It was not important that the guests pay attention to what is being said or done at the altar.

The scene was so different from most weddings in the US, which are often as much a secular proclamation as a divine rite, and in many cases, religion plays no role in marriage. Instead of the gods, our friends and family witness our choosing of someone as a life partner.

Later that week, a longterm expat would tell me that ritual and spirituality were a way of life on Bali. From her experience with Balinese friends, she told me that one did not choose to be Hindu or to believe in its tenets as one might choose to be part of a religion, or not, in the U.S. Rather Hinduism reflects the way of the universe; it simply just is. Marriage is part of that path.

I was not searching for a husband on Bali. I cherished my freedom to move about the world at will without compromise, even at the price of spotty companionship. I didn’t explain this to the taxi driver, but I also did not bristle at his questions. It seemed natural that he would ask.

I also couldn’t argue against his proclamation that “Bali is Love”—not in the sense of marriage but in terms of romance. Only a few days prior, I had ventured on my first night dive, during which giant decorator crabs had danced like enchanted marionettes. And when I surfaced, a gorgeous lunar eclipse was giving show in the night sky. I wasn’t alone at the time, and there was nowhere else and with no one else in the world that I would rather have been. It felt like that moon was just for the two of us, lucky travelers in Indonesia for the first time, who had a chance to be together under the reddish glow of an eclipsing moon.